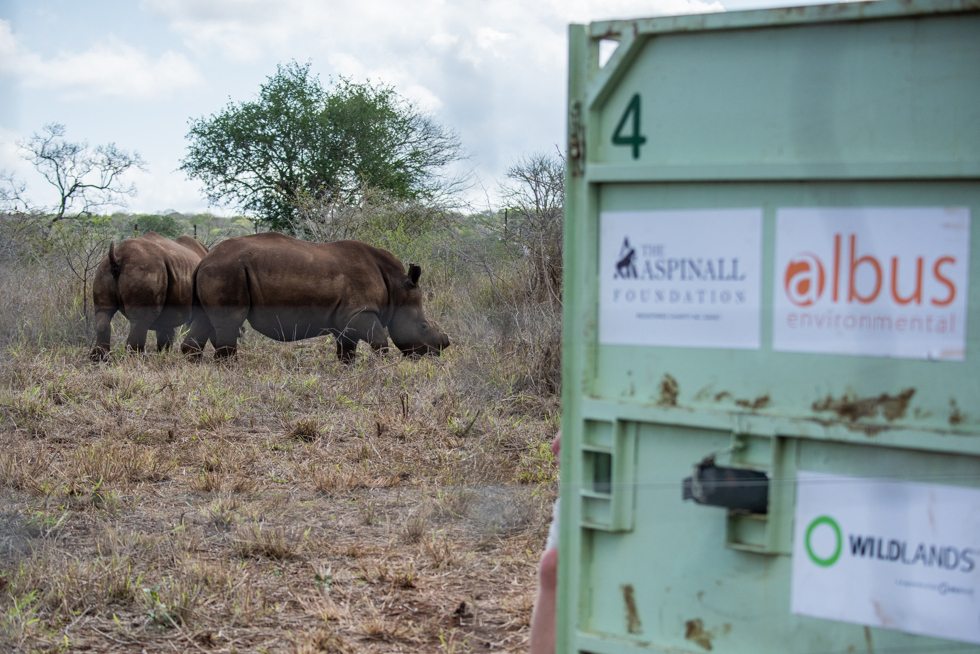 The Aspinall Foundation, in partnership with Albus Environmental, has collaborated with WILDTRUST and Conservation Solutions to translocate two white rhino orphans to their forever home, Somkhanda Community Game Reserve in the Kwa Zulu Natal Province of South Africa.

The two rhino, Makhosi and Mpilo, underwent rehabilitation at a rhino orphanage and have now been successfully released back into their natural habitat. Now four years old, Makhosi arrived at the orphanage in 2016 severely dehydrated and malnourished. Two years later, Makhosi was joined by Mpilo, whose mother was brutally killed by poachers at Somkhanda when he was only 9 months old. Mpilo is now three years old, his full name being Ncenga iMpilo, which means fighting for life; a name he was given by the Emvokweni Community Trust who own and manage Somkhanda and one that could not ring more true.

Damian Aspinall, Chairman of the Aspinall Foundation said, “we will never truly understand the trauma that these two young rhinos have endured and the extent to which they still suffer from this. What we do believe, however, is that we have been able to put joy back into their lives.”

In preparation for their release, the two rhino were dehorned and habituated in a boma at Somkhanda for over a month. All human interaction and contact was completely stopped in preparation for their release back into the wild and they were closely monitored by wildlife rangers and the anti-poaching unit at the reserve to ensure the rhinos’ safety.

Andrew White of Albus Environmental comments, “It is immensely rewarding to know that we have contributed towards giving these two orphans the chance at a normal, happy life after such a tragic start. The kindness and care shown to them by all involved is a shining example of how coming together and caring makes a difference and needs to continue in earnest. The team involved are a credit to rhino conservation”. Megan Lategaan who leads the rehabilitation team at the orphanage added, “Rehabilitating the two calves was not an easy task as rhino are highly dependent on their mothers for the first few years of life. The team of staff at the orphanage are excited to have accomplished their mission to send these rhino back into the wild, where they belong. This is a proud moment for us, Mpilo and Makhosi can begin to contribute back to the wild white rhino populations in South Africa.”

The team from Conservation Solutions were on the ground to offer logistic and veterinary expertise, ensuring that the animals were safe and endured minimum levels of stress during the translocation. Kester Vickery of Conservation Solutions comments, “the fact that two orphan rhino, Makhosi and Mpilo, are alive today is a testament to the care, dedication and collaboration between the conservation staff at Zululand Conservation Trust and Somkhanda Community Game Reserve. Given the current poaching pressure facing the white rhino population in South Africa, every animal is important no matter the cost or effort involved.”

WILDTRUST CEO Dr Roelie Kloppers said, “Since 2007, when rhino poaching saw a sudden and dramatic increase, it has been taxing on all involved to stay motivated and believe there is light at the end of this dark tunnel. Mpilo and Makhosi’s story helps us all remember why it is important to continue supporting rhino conservation. We are extremely grateful to everyone involved in making this return to the wild possible.” Translocating wildlife is a very costly activity that requires the most experienced logistical support. Moving the rhino back home to Somkhanda was made possible through a generous donation by Albus Environmental and The Aspinall Foundation. Dereck Milburn, Regional Director at The Aspinall Foundation said, “if we are to succeed, conservation needs more success stories like this, where communities play a significant role in protecting our endangered species.”

Makhosi and Mpilo are a true example of how a tragic beginning can have a positive ending.

Elephants with a purpose: three tuskers moved to new homes to secure their genetics in South Africa